The curious case of the 'Vader beetle'

If you have an aversion to pictures and discussion of beetles, slugs, and ravenous song sparrows, go on to the next post. Otherwise, here's some research I did on a beetle found on a routine plant-hunting expedition I was on recently. (Its nickname came from looking at it from the belly side. It uncannily resembles Darth Vader from that vantage point.)

First, a picture of the specimen (source): 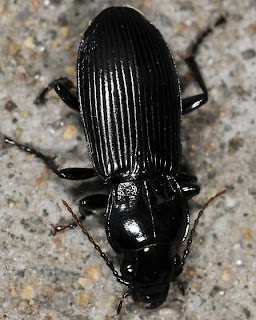 Exhausting Googling gave me a tentative name: Pterostichus melanarius (Illiger). Given the name, I found out its habitat (native to Europe but spreading into the Midwest from the coasts - check, because my specimen was found in the heart of the Midwest), food (aphids, slugs), and what eats it (any insectivore in the area, basically). Its length is listed as Coincidentally, a colleague caught a song sparrow - listed in the field guide as a connoisseur of this carabid - a few days later in a live-animal trap that was only supposed to catch mammals.

Now share your beetle stories! Or correct my species identification.

Update: While walking on a wooded bluff the morning of 9/27/08, I spotted a juvenile individual of this species; it was about 12mm long and had yellowish legs. Leia, perhaps?
Posted by Hannah at 7:00 AM

What a pretty bug!

Thanks, NC! Unfortunately, the thorax of the specimen I caught is falling off. I really have to get around to that dissection.

I write here too: